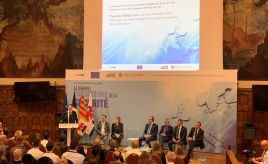 As part of the EU-funded PACTESUR project, the City of Nice hosts the European Security Week from 14 to 18 October. Catherine Piana, Director General of CoESS, had the honour to speak during the Opening Conference on 14 October and to promote the importance of a Security Continuum and public-private partnerships to tackle today’s challenges to public security.

The conference was opened by Christian Estrosi, Mayor of the City of Nice, and Sir Julian King, European Commissioner for the Security Union. Estrosi reminded participants of the tragic attack on the Promenade des Anglais in Nice, when a terrorist drove a cargo truck into crowds that celebrated Bastille Day in 2016. Similar attacks were conducted afterwards in Berlin (2016) and Stockholm (2017). Nice has since invested heavily in the protection of public spaces. Estrosi made it clear that, with the right security responses, the Promenade des Anglais has again become a flourishing and popular public space welcoming more visitors than before. The city has in recent years been at the forefront of counterterrorism initiatives, for example with the Declaration of Nice, signed by 62 city mayors across Europe.

Sir Julian King agreed that public spaces such as the Promenade des Anglais are very vulnerable to low-cost attacks due to their openness, and that such terrorist threats could only be countered by strategic responses and cooperation on all levels. He congratulated the City Nice for cooperating with all important actors, both in local response and during the European Security Week, to effectively counter terrorist threats in public spaces. Public-private partnerships would further play a particularly crucial role in addressing these new challenges to public security. The EU supports respective initiatives with its Action Plan to support the protection of public spaces.

Catherine Piana, Director General of CoESS, took the opportunity to promote the recently published CoESS White Paper on the Security Continuum in the New Normal. The White Paper includes very practical recommendations, criteria and step-by-step guidelines for the establishment of public-private partnership frameworks. Private security companies and their 1.5 million licensed guards in the EU can play an important and complementary role to law enforcement in the protection of public spaces. They are deployed in locations where police cannot be permanently present, especially in public spaces. To tap into the potential of millions of eyes and ears is an opportunity that must be seized by creating public-private partnerships and agreements for the exchange of information. France is already a good practice example for cooperation frameworks: earlier this year, private security and the Ministry of Interior signed a Protocol allowing the exchange of operational information between the Interior Security and private companies at the local level. At the same time, public authorities and law enforcement also t have he responsibility to follow strict quality criteria when buying private security services, which is a basis for the functioning of a trustful public-private partnership and the exchange of information.

The so-called "Security Continuum" is already common practice in the US: Rebecca Weiner, Assistant Commissioner at the New York Police Department’s Intelligence Bureau, highlighted that private security companies are a force multiplier. Respective cooperation, exchange of information and training between public and private forces have therefore proven to be highly valuable in New York City.

More information on the European Week of Security can be found here.