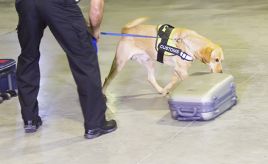 First the good news: last year, the number of people who were killed by terrorist attacks in the EU has decreased considerably in comparison to 2017 – that is one of the more positive findings of this year’s EU Terrorism Situation and Trend Report published by Europol which can be found here.

Still, the threat remains high: In 2018, a total of 129 foiled, failed and completed attacks were reported by EU Member States. Jihadist terrorists were capable of perpetrating a number of deadly attacks in public spaces such as the shooting at the Strasbourg Christmas market and in a supermarket in Trèbes, both in France. Also the number of arrests linked to right-wing terrorism increased for the third year in a row.

Especially the evolvement of terrorist tactics is most worrying: according to the report, three terrorist plots involving CBRN materials were disrupted in 2018 in the EU. A general increase of CBRN terrorist propaganda, tutorials and threats was observed. In June 2018 for example, a terrorist plot using ricin was uncovered in Cologne, Germany. In November 2018, a Lebanese citizen was arrested for the preparation of a chemical-biological plot in Sardinia, Italy.

Completed jihadist attacks were carried out using firearms and unsophisticated, readily available weapons (e.g. knives). The explosive-related jihadist plots in 2018 were aimed at soft targets and mass gathering locations (public events, shopping areas, bars and clubs, etc.). Notably, attempts to use IEDs in combination with chemical or biological toxins were observed in 2018.

As the report correctly states, “the feeling of insecurity that terrorists try to create must be of the greatest concern to us because it has the potential to undermine the cohesion of our societies.”

While the EU brought considerable added value to the formulation of security policies and recommendations to Member States with the Security Union and Special Committee on Terrorism, it is crucial that all European institutions and stakeholders deliver and continue the right path taken in the past legislature. CoESS is fully committed to this joint-effort by offering its expertise and experience, for example through its contribution to the EU Operators Forum and other Expert Groups. In this regard, it is also crucial that cooperation and information sharing between public and private actors is not only promoted, but legally facilitated.

Europol’s EU Terrorism Situation and Trend Report (TE-SAT) is an annual publication on request by the European Parliament, providing a concise overview of the nature of the terrorist threat in the EU.