KÃ¶tter Group signs charter for diversity in the workplace 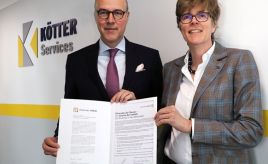 The Kötter Group is expanding its commitment to diversity in the workplace by signing a corresponding charter in Germany. In doing so, the security company underlines its philosophy of judging candidates and employees according to their abilities, experience and values âârather than ethnicity, religion or other individual characteristics.

As part of this commitment, the company organised various activities, such as staff workshops on the occasion of German Diversity Day, Azubi-Social Day and the muTiger Foundation. More information can be found on www.koetter.de/diversity.

CoESS strongly supports the multiple initiatives of its members across Europe to foster diversity in the workforce of private security companies. Together with its social partner UNI Europa, CoESS already raised awareness of the topic in the joint report on “Anticipating, Preparing and Managing Employment Change in the Private Security Industry”, which was part of a European Commission funded project (see here). Supporting a more diverse workforce within the private security sector was identified by social partners as one of the priorities in the upcoming years.

The German Diversity Charter is an employer initiative to promote diversity in companies and institutions. It is supported by Chancellor Angela Merkel and the Federal Government Commissioner for Migration, Refugees and Integration, Minister of State Annette Widmann-Mauz. The aim of the initiative is to promote the recognition, appreciation and inclusion of diversity in the workplace in Germany. The heart of the initiative is the charter signed by Kötter Group which can be found here (in German).