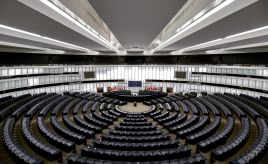 Before the European Parliament votes the new European Commission under President-elect Ursula von der Leyen into office, it organises public hearings this week to assess the Commissioner-designates suitability for the job and their priorities for the next legislative term. The Commissioner-designate for Home Affairs, Ylva Johansson, has today responded to questions of the Committee for Civil Liberties, Justice and Home Affairs in European Parliament – indicating an ambitious security policy agenda, which CoESS highly welcomes.

One can only expect concrete information about future policy initiatives of the European Commission from its Work Programme, to be published once Parliament approved the College of Commissioners. However, the responses provided today by Ylva Johansson, Commissioner-designate for Home Affairs, indicate that security policy objectives for the next legislative term are ambitious. Back in Sweden, she was a member of five different governments, most recently as Minister of Employment Affairs.

CoESS listened in closely to the hearing in Parliament, also in light of its 10 Recommendations for the next legislative term, and highly welcomes that Ylva Johansson made a commitment that her work on the Security Union will be guided by the recommendations made in the report of the Special Committee on Terrorism, published during the past legislative term. It is crucial that the new European Parliament and Commission follow-up on these important recommendations on a variety of internal security matters, including on the revision of Directive 2008/114 on European Critical Infrastructures, public-private partnerships and security aspects of the EU drone regulation.

Johansson also stressed that the EU needs to ensure better cooperation and information sharing across different communities and between the public and private sectors – which is in line with the call for better cooperation in a Security Continuum and public-private partnerships repeatedly made by CoESS. She wants to close remaining gaps in existing security frameworks, build more resilience across Critical Infrastructure and step up protection – hopefully a sign for an ambitious revision of the Directive 2008/114 on European Critical Infrastructures. Johansson further said already in her written response to questions of the Parliament that “it is crucial to ensure that there are no blind spots when it comes to the security of our citizens. […] The Security Union goes beyond the concept of cooperation at national level towards a collaborative approach to protecting the collective security of the Union” – an understanding CoESS fully supports.

The European Parliament is currently set to vote on the new College of Commissioners on 23 October, 2019. If approved by the Parliament, internal security policies will fall under the responsibility of Margaritis Schinas (Greece), nominated Vice-President for “Protecting the European Way of Life”, and Ylva Johansson, nominated as Commissioner for Home Affairs. The Directorate-General for Migration and Home Affairs (DG HOME) would report directly to Johansson. The Vice-President would be providing guidance and coordination for her portfolio as well as for several other portfolios.

Margaritis Schinas will have to express himself in European Parliament on 03 October, 2019. He has already worked at the European Commission for almost 30 years and served as Member of the European Parliament from 2007 to 2009. The vast portfolio responsibilities attributed to him as Vice-President-designate range from education and culture, to employment, security, migration, and to health and equality. He shall coordinate the Commission work in three main areas: on skills, education and integration; on Security Union and hybrid threats; and on a New Pact for Migration and Asylum.

The written response of Ylva Johansson to questions of the European Parliament can be found here.

Written responses of Margaritis Schinas, Vice-President-designate for “Protecting the European Way of Life”, can already be found here.