U-Space Opinion: CoESS sees a positive evolution of the text 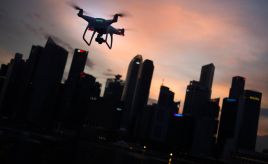 The European Aviation Safety Agency (EASA) has sent the final Opinion on a regulatory framework for the U-space to the European Commission. As a member of the U-Space Demonstrator Network, CoESS has been consulted on the file back in 2019, and sees a positive evolution of the text since last year.

The rising number of unmanned aircraft system (UAS) operations in the European airspace poses safety, security and airspace integration issues. To ensure, on the one hand, safe UAS traffic management, and on the other hand, safe operation of UAS within the existing air traffic environment in a harmonised manner, there is a need for a regulatory framework.

The regulatory framework proposed by the Opinion shall create the conditions for manned and unmanned aircraft to operate safely in the so-called shared “U-space” airspace, and establish harmonised rules across EU Member States. The U-Space will complement the existing Air Traffic Management (ATM) environment of ‘traditional’ manned aviation and will evolve along with the growing density and complexity of the air traffic. The ultimate objective is to prevent collisions between aircraft and to mitigate the air and ground risks.

According to the Opinion, Member States have full authority on the designation of the U-space airspace, and therefore have the power to decide how their airspace is designed. The Opinion however sets in place harmonised rules – for example on which U-space services are mandatory for UAS operations to ensure safe and efficient operations. These include network identification, geo-awareness, traffic information and UAS flight authorisation, but can be extended by Member States. The Opinion also includes more detailed obligations for UAS operators when they operate in the U-space airspace.

In the consultation process, CoESS has recommended to extend priority rules to certain emergency operations of private and public UAS operators, including search and rescue operations as well as assistance of first responders during a security incident. The final Opinion now includes such a provision and proposes that, when a flight authorisation is granted, priority rules will be granted to entities carrying out the following activities:

During the aforementioned consultation in July 2019 on the first draft Opinion, EASA received more than 1 000 comments from drone and U-space stakeholders as well as from national authorities and the aviation industry. Apart from the consultation process, CoESS is engaged in EASA’s U-Space Demonstrator Network. The European Commission is expected to adopt a final text by the end of 2020.

You can find more information on the Opinion here.