CoESS at BusinessEurope: low-cost procurement and labour shortages put pressure on our sector 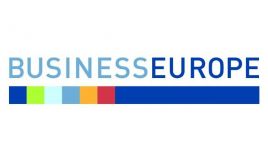 CoESS was invited to present the current situation of the European private security sector to national employers’ associations from across Europe that were assembled at BusinessEurope’s Social Affairs Committee. Alexander Frank, Head of EU Affairs at CoESS, stressed that while the private security sector has seen overall growth and a widening of activities in the past 20 years, low-cost procurement and labour shortages present an increasing challenge to businesses, which needs to be addressed jointly by European employer associations – both on national and European level.

Alexander Frank highlighted that there is a growing demand for private security services across Europe. This is due to a large range of factors, analysed in the recent Anticipating Change study, which was conducted by CoESS in cooperation with UNI Europa and financed by EU funding. This rising demand can also be seen in economic terms. According to the study, turnover in the private security industry in the EU presented an increase by a factor of 2.3 between 2000 and 2016, and by 8% in 2016 alone – a substantial growth that is also reflected in the private security sector’s workforce. In the EU, private security companies employed in 2016 roughly 1.6 million private security guards, with a 4% increase in 2016 – a number, which is almost equal to the number of police officers in the EU.

With this increasing demand come challenges, which pose a substantial burden to the entire private security industry: labor shortages and low-cost procurement.

Many countries, specifically in central and eastern Europe, have high proportions of older employees in the workforce. In the light of technological progress and innovation, businesses and workers will need to adjust to an older workforce and potential shortages of both skills and workers. But at the same time, private security companies have difficulties finding young, skilled employees.

According to the “Work Force Report” (“Arbeitskräftereport 2018”) published by the German Federal Ministry of Labour and Social Affairs, 78% of private security companies in Germany have problems finding skilled workers – making it the most affected sector in Germany just after the temporary employment sector. Also in France, a study found out that 55% of private security companies have difficulties finding skilled workers. Together with an aging workforce, the lack of skilled labour, both in terms of quantity and quality, is becoming increasingly problematic and poses a challenge to the entire sector in order to respond to market demand.

In addition, the private security sector faces price pressure due to low-cost public procurement. When qualitative criteria, for example related to training and working conditions of staff, are not met, this can lead to very serious risks to public security. What is equally worrying is that by dictating low prices in calls for tenders, public procurers provide incentives for disregard of sector-specific law and collective agreements by non-professional service providers, initiating a race to the bottom, which does not fit to the increasing demand for high-quality security services.

Alexander Frank highlighted that CoESS is addressing these topics in its Social Dialogue with UNI Europa. Together with the Anticipating Change study and recommendations for future action, the Best Value Guide for the procurement of private security services was an important milestone in joint initiatives of CoESS and UNI Europa. But furthermore, a strong voice of European employers will be needed to address these issues in the long-term on EU-level – for example when calling for the promotion of high-quality Initial and Continuous Vocational Education and Training (IVET/CVET) as well as re- and upskilling pathways (see CoESS’ 10 Recommendations to the EU).

With BusinessEurope representing businesses and national employer associations in 35 European countries, CoESS is glad to have a strong ally in this effort. A recent example is the joint employers’ statement on labour shortages and skills mismatches, including a catalogue for EU-action (see here). Alexander Frank stressed that only collaboratively, European employers can tackle these important challenges that in the end address all European businesses.