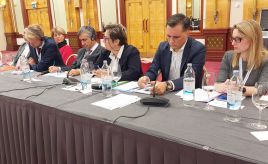 Stakeholder debates were held on the consequences of and solutions to labour shortages in security services under the leadership of CoESS’ national members in the three countries (CSA, BDSW, Säkerhetsföretagen). The workshops assembled in total more than 150 participants, including a large range of stakeholders such as Ministries of Home Affairs and Labour, Members of Parliament, public employment services, and law enforcement agencies.

In June 2022, the EU Sectoral Social Partners for the Private Security Services published, thanks to EU-funding for the INTEL Project, the first-ever EU-wide survey report on labour and skills shortages in the sector – coming to alarming results:

One of the key objectives of the INTEL project is to support national sectoral Social Partners in tackling these important challenges through the exchange of best practices, ideas for solutions, and collaboration with public authorities.

Against this background, CoESS’ members in Croatia, Germany and Sweden were from the beginning supporters of the EU-funding project led by CoESS and UNI Europa, and brought the debate to national level.

From September to October 2022, the three associations organised dedicated workshops to discuss solutions to sectoral labour shortages at national level not only with Social Partners representatives, but also a large range of competent authorities – including policymakers from Parliament and the government, employment agencies, training providers, chambers, and law enforcement.

Berlin: Imagine there is work and no one goes

The first workshop kicked off in Berlin on 01 September 2022 with the motto “Imagine there is work and no one goes”. Participants discussed the very grave extent of labour shortages present in the German market. Collective bargaining was highlighted by both Social Partners, BDSW and ver.di, as an important tool to tackle both labour and skills shortages in an efficient way – e.g. through the promotion of best value procurement practices; the fight against unfair competition that undermines social standards; enhancement of attractiveness in various way; strengthening of vocational education and training; and better regulation of the sector. This should be supported by active labour market policies that enhance labour supply by targeting women, young people, women, and long-term unemployed. A high-level guest to the event was Member of German Parliament, Dr. Ottilie Klein, who received the INTEL survey report and stressed that labour shortages in private security are a serious issue also for public security, concluding: In this day and age, we cannot afford less security.

This was the same key message at the second workshop in Stockholm, which was organised by Säkerhetsföretagen on 05 September 2022 with the participation of law enforcement, the Stockholm municipality and Social Partners. Participants stressed that both labour and skills shortages, together with rising crime rates in the country, are a key challenge. Across Europe, private security plays a complementary role to law enforcement, which was exemplified by the discussions in Sweden where the importance of the security continuum and public-private partnerships were highlighted by all parties. Private security is important for a feeling of security in society, and labour shortages in times of rising crime would therefore present a key challenge. What is needed nowadays are not only compliant companies with high labour standards, which are generally fostered by the generally applicable sectoral Collective Agreement in Sweden. Participants agreed that further focus on apprenticeships and vocational education and training are key to secure adequately qualified security personnel in the future. To this end, the Swedish sectoral Social Partners already operate a dedicated training institute (BYA) which is managed by the Collective Agreement and a lighthouse example for other countries.

Zagreb: Security is not everything, but everything is nothing without security

With this quote, the President of the Croation Security Association (CSA), Lidija Stolica, opened the last workshop which took place on 18 October 2022 in Zagreb. Addressing both employers and unions, but also representatives of the Ministries of Labour and Home Affairs. She stressed that only a sectoral Social Dialogue in the country could protect workers and business in these challenging times. Collective Bargaining would be a sign of a strong democracy. At the same time, she called on the companies that the industry can only grow if it attracts a young and diverse workforce – one of the short-comings in the country, which relies a lot on elderly workers. Participants however also agreed that it is on the public authorities to better enforce labour law to fight illegal working practices, inadequate working conditions, and unfair competition in order to enhance the attractiveness of the sector. In this context, the Ministry of Labour presented next steps for the overhaul of the national labour law, of which one of the key objectives is to promote Collective Bargaining structures, which are traditionally weak in the country and a key problem to tackle also labour shortages. A generally-binding Collective Agreement could be a crucial step to enhance attractiveness of the private security sector in Croatia – a mission to which the CSA is firmly dedicated.

As next steps of the project, CoESS and UNI Europa are currently finalising a best practice study with more than 40 examples of how public authorities and Social Partners tackle different aspects of labour and skills shortages in private security services. The Best Practices, together with the workshop results and a dedicated website, will be published and launched at the high-level INTEL conference in Brussels on 24 February 2023.