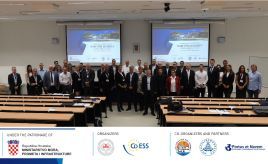 CoESS and the Croatian Security Association held on 30 September the first international Maritime Security Conference at the University of Split, bringing together experts from the Academic and Business world, as well as the Ministry of the Sea, Transport and Infrastructure of the Republic of Croatia

The Conference looked at the current and future challenges on Maritime and Port Security under the angles of the EU and national legislation, and evolving threats. The meeting of experts from across Europe happened only a few days after several deliberate attacks had been carried out in the Baltic Sea against gas pipelines. Similar attacks on other maritime critical infrastructure such as underwater cables for oil, gas and communication can be expected - a development which reinforces the need to protect critical infrastructure more than ever.

CoESS called for stepping up security in the maritime and ports ecosystem, and introduce ISPS-like measures in inland ports, but extending them to cover organised criminal activities, not just terrorism - which is the main threat behind the ISPS code. What is more, passenger ships are those most at risk, and the security measures around them are far under those in place in aviation and airport security and should be raised.

Looking at ports as objects of Critical Infrastructure, CoESS highlighted its added value in supporting the standardization effort with CEN TC 439 "Private Security Services" and producing the updated CoESS Training Manual for Maritime Security Personnel. Also, ports are soon expected to meet certain security standards as part of the future EU Directive on the Resilience of Critical Entities.

The Ministry of Transport and Ministry of Interior respectively presented the legislation in place and how it is implemented, as well as the exercises carried out in the ports of Croatia, which have a geostrategic position at the crossroads of important industrial sea routes. Technical solutions were also explored to reinforce the security of ports alongside the human factor, including access control, intrusion detection, CCTV, etc. Solutions will also increasingly include dogs (for explosive and narcotics detection) and drones for surveillance but also instruments to detect hostile drones.

At a crucial time in the maritime and port security, CoESS and CSA showed the relevance of the work of the Maritime and Port Security Committee and the contribution of private security to the protection of people, assets and infrastructure for the benefit of society as a whole.

CoESS his special thanks go to our member CSA, namely Lidija Stolica, President, Alen Javorovic, Secretary General and Tonci Prodan, Member of the CoESS Maritime and Port Security Committee as well as to the members of the Maritime and Port Security Committee present in person, including Johan Ohlsson-Malm (Chairman), Guido Fallentheyn (former Chairman), Cornelius Toussaint (Member) and Kristin Kellner (Member). Finally a big thank you to the University of Split for hosting the event, and the Ministries for Transport and Interior for their active support and participation.