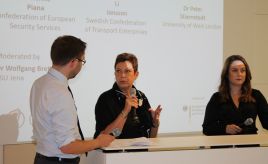 Catherine Piana, Director General of CoESS, joined an international panel at the final conference of the German OSiMa (Ordnung des Sicherheitsmarkts/Organization and Regulation of the Civil Security Market) project – together with Li Jansson (Swedish Security Industry Association Säkerhetsföretagen) and Dr. Peter Stiernstedt (University of London). The event discussed how public security should be managed, organised, regulated and financed in the future.

Dr. Stiernstedt highlighted that security is part of the social contract and would have to be regulated differently than other industries. He presented his recent study, which analyses the state of regulation of private security companies (PSCs) in Europe. Catherine Piana took the opportunity to stress that legal framework for public-private partnerships (PPPs), highest quality standards in training and equipment of guards, as well as best-value procurement should be at the heart of better regulation in order to realise a Security Continuum that is fit for the numerous security challenges that our world is facing.

The provision and procurement of quality services would be at the centre of the Security Continuum. Catherine Piana stressed that at least 50% of criteria in public security tenders should be based on quality – in the case of Critical Infrastructure even 60%. EU minimum standards could be helpful for basic training requirements for security personnel operating at cross-border transportation hubs, following an in-depth EU assessment. However, differences in the organisation, regulation and competences of PSCs in the Member States, which are historically, politically, and societally grown, would have to be respected. Li Jansson further agreed that the increasing presence of private security providers in the public space would urgently require efficient PPPs.

The OSiMa project, financed by the German Federal Ministry of Education and Research, analysed which forms of security services exist, how they should be organised and how the private security industry can contribute from a regulatory point of view. At the same time, the project’s aim was to enable a definition of areas of responsibility that should stay controlled by law enforcement agencies due to legal, administrative, technical, economic, and business considerations.

The results of the project will be presented by the project partners later this year on an open information platform, which was developed by the project partner Fraunhofer FOKUS and which will be maintained by the German Federal Association of the Security Industry (BDSW). Besides, four other partners were involved in OSiMa: the Brandenburg Institute for Society and Security, the European University Viadrina Frankfurt/Oder, the Friedrich Schiller University Jena, and the University of Potsdam.