EU Drone Strategy 2.0: CoESS strongly supports the roadmap towards the use of UAS in Europe 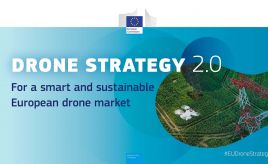 The European Commission has published its new EU Drone Strategy 2.0 at the European Drone Days on 29 November. Following up on the EU Drone Regulation, the Strategy announces new actions that are important to better promote the use of UAS in our industry. CoESS was involved in its development throughout various activities, and our efforts were very successful: many of CoESS’ calls feature in the new Strategy, including on the announcement of new Standard Scenarios, legal and non-legal actions on C-UAS in CIP and public spaces, and the professionalisation of authorities.

Drones represent an interesting and useful addition to the range of technological means and equipment in use in private security services. The use of drones and other unmanned vehicles are also consistent with the new paradigm in private security, the so-called “New Security Company”, whereby security agents and technology are combined into “security solutions”, with a view to optimising the service to clients and provide enhanced security, also to security officers. CoESS sees opportunities in different types of activities with unmanned aircraft (UA) to support security officers in their missions, enhance security of public spaces and clients, and detecting and preventing the ill use of UAs.

To promote the use of drones in the security services, CoESS is hence involved in the development of a regulatory framework for drone operations since many years and an official member of the European Commission Expert Group on Drones. Following the implementation of the EU Drone Regulation in Member States in 2021, the European Commission now published a new EU Drone Strategy 2.0, which shall address short-comings in the regulatory framework and barriers to the use of drones in Europe at large.

To make sure that the needs and requirements of the security industry to better integrate drones in its services are reflected, CoESS was involved in the development of this Strategy since 2021, including through the participation in the EU Expert Group on Drones, a respective public consultation, and a high-level hearing with the European Commission – with success: the Strategy includes multiple activities that CoESS has previously called for, notably:

CoESS highly welcomes these actions and is working on a roadmap to support the important initiatives. As European Commissioner for Transport, Adina Valean, rightly said during the Opening of the EU Drone Days: in our times, we also need to expand capabilities to protect European citizens. Drones can play an important part in this effort, and CoESS is ready to play its part in the implementation of the new announced actions.